Comeback For The Win! Literally - By Taylor Peyton

Kickoff was delayed due to Tobacco Road’s bus being stuck in traffic. In the first half, there were a few chances for both teams. But a lack of luck for the Silverbacks and another solid performance by Bryce Billington made for a 0-0 score at the end of the first half. 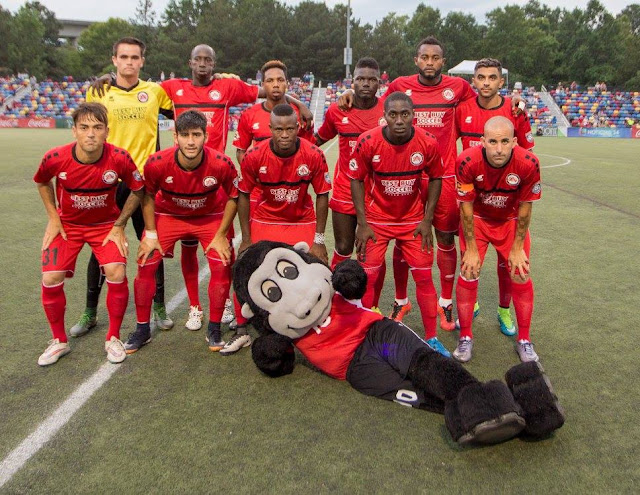 Things became much more interesting in the second half. Starting in the 72nd minute when the Silverbacks were given a free kick in dangerous territory. Garcia crossed it in, and it was initially caught by Tobacco Road’s keeper Benjamin Hummel, but he seemingly lost control, and the ball was inserted into the net. The goal was ruled out as there had been contact between Hummel and a Silverbacks player that caused him to lose the ball. Only a few seconds later Tobacco Road were awarded a penalty when Mitch Garcia and Tobacco Road’s Evan De Ycaza collided in the box. Jason McCartney, who plays his college soccer for Emory, took the penalty, which he converted by chipping it down the middle.

The Silverbacks struggled for the next 18 minute to find the equalizer. They were desperate, but nothing worked until stoppage time when the ball met a Tobacco Road player’s hand. Many people at Silverbacks Park felt that the handball had occurred in the box, but the ref ruled that it was just outside and gave the Silverbacks a free kick right on the edge of the box. Mitch Garcia stepped up and took the free kick brilliantly to level things up. With his deadly left foot, the Silverbacks’ captain curled the ball into the top right part of the net. Stunning Benjamin Hummel who could only take one small step and watch it fly past him.

Garcia’s goal forced extra time, and all of the momentum had shifted to Atlanta as extra time began. In the first half of extra time the Silverbacks took the lead when a long ball from Adnan Bangura met both of Hummel’s fists, he was then caught way out of his net as the ball he punched away found its way to Pedro’s foot and from there it bounced in the direction of Avery Shepherd who headed in with his back turned to the goal. After turning around and verifying the ball had gone into the net Shepherd took his shirt off and made a mad dash towards the Silverbacks bench. He was given a yellow card for taking his shirt off but who could blame him? According to the Silverbacks Twitter page, it was his third game-winning or tying goal of the season. The Silverbacks were able to hold on despite a late red card for Abu Tommy. Tommy was given a straight red card for a challenge that was deemed reckless by the ref. 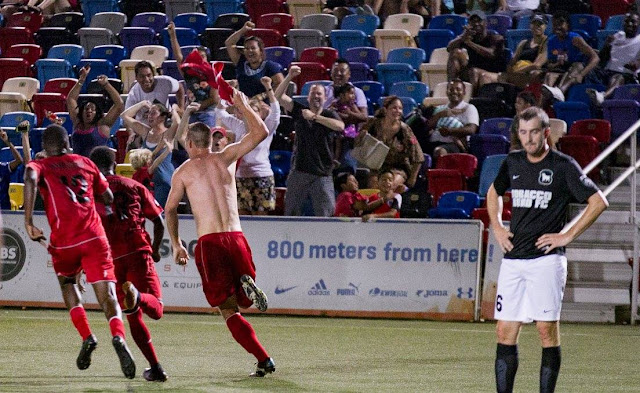 A great crowd was on hand to witness a great night that will go down in Silverbacks history. When the final whistle blew, many fans ran onto the pitch to celebrate with the players. Fans were hugging the players, jumping around with them and singing the universal song “Campeones Campeones Campeones ole ole ole” in tribute to them. Many people said they hadn’t felt that kind of happiness and energy at the park in a long time.

Amongst those in attendance was Colin Hubbard, a writer from the Gwinnett Daily Post. Regarding sports, GDP is mostly known for their coverage of local High School sports, the Gwinnett Braves AAA Baseball team, and the Gwinnett Gladiators ECHL Hockey team. Apart from that they have always covered the Silverbacks very well throughout their years as a professional team. Since the move down to the Semi-Professional ranks this year there hasn’t been much content about the team but the buzz created by the playoff run, along with the first playoff game being played in Gwinnett County made it impossible for them not to write something about it. The previously mentioned Colin Hubbard wrote fantastic articles about the wins over the Railhawks and Tobacco Road. He also tweeted a video he took at the game, which captured the tying goal and his priceless reaction to it.

Another notable person in attendance was Wojtek Wysocki. Wojtek is a familiar name to those who have seen his Youtube channel that is full of highlights from basically every home game of the NASL era. He hadn’t uploaded any highlights from this season in the NPSL before the playoffs but with the last two games he has picked up right where he left off and put together two great highlight videos. 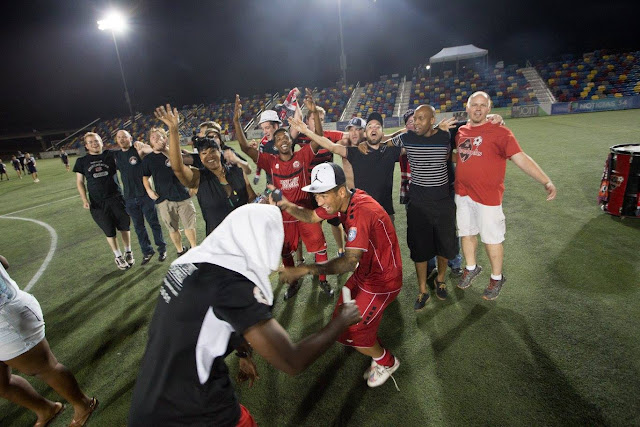 Regional playoffs are what lays ahead for the Silverbacks. Their first opponent is Miami United, who are the champions of the Sunshine conference. There will be a preview of the game against Miami in the next few days. They will be a tough team to beat, but the Silverbacks seem like they will be up to the task. The game will be streamed by Miami so be sure to tune in.
at 9:07:00 AM